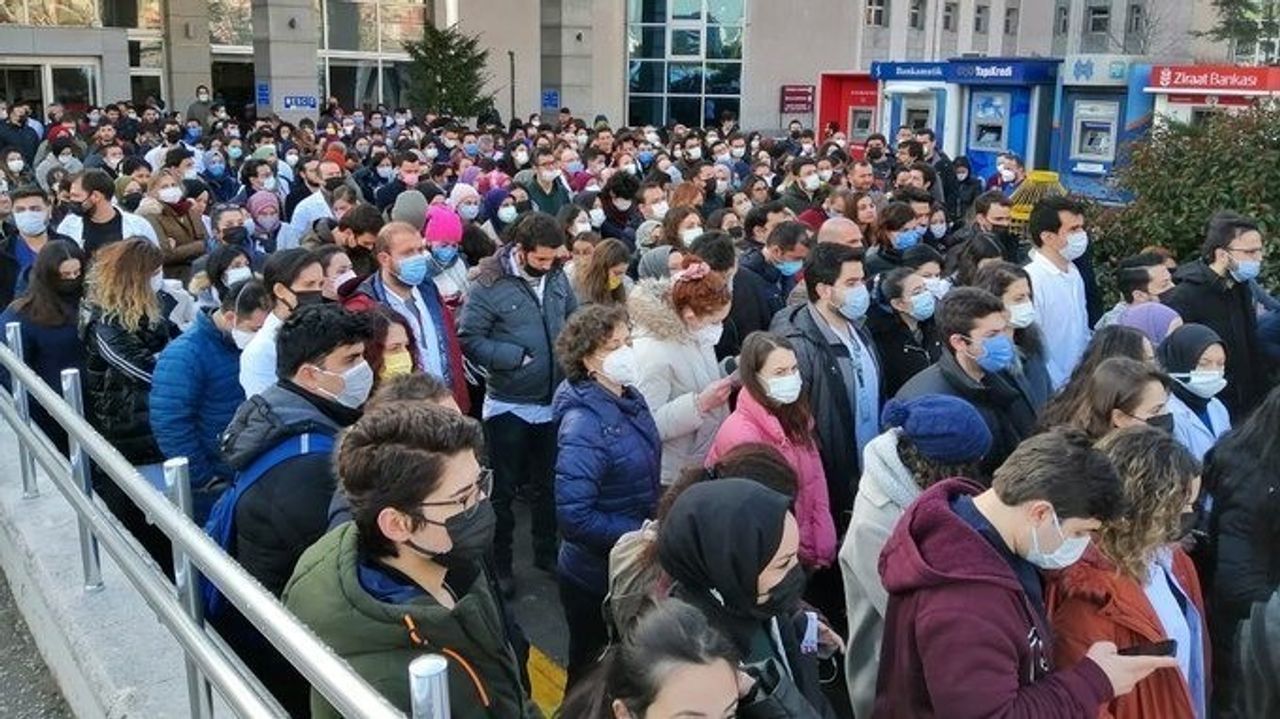 The Turkish Medical Association (TTB), a professional organization for doctors with more than 100,000 members, described the two-day strike as its biggest work stoppage to date. The Hekimsen union also staged a three-day strike starting Monday. It recently reached nearly 20,000 members after starting with a few thousand, as anger grows over rapidly declining real wages, poor benefits and growing violence in healthcare facilities.

The strike, which began on March 14, Turkey’s “Doctors’ Day”, follows strikes by doctors and healthcare workers last December, January and February. In previous strikes, health workers have warned they will expand their actions if President Recep Tayyip Erdoğan’s government fails to meet their demands.

According to the pro-government trade union confederation Türk-İş, the poverty line for a family of four in Turkey reached 15,140 Turkish liras (currently $1,030) in February. Doctors are demanding a significant increase in their salaries and pensions, which are now well below the poverty line. Along with better benefits and working conditions, doctors are demanding legal measures to deter attacks against them in healthcare facilities, as 40 acts of violence against healthcare workers take place every day in Turkey.

The TTB responded to an official letter sent by the Ministry of Health, which threatened doctors for repeated strikes. He said: “Especially those who have caused preventable deaths during the pandemic cannot tell us about the requirements of the right to health. Our strike actions are for a healthier society and for health policies that prioritize public health.

Doctors have protested that patients have only five minutes for a physical examination in hospitals due to the privatization of the health system and the reduction of its resources. Another demand was for COVID-19 to be officially recognized as an occupational disease.

Doctors and other healthcare workers in Turkey, as well as around the world, have fought the pandemic on the front lines and have been deeply affected by the government’s policy of mass infection and death.

The TTB staged a protest outside the Health Ministry in Ankara on March 11, the second anniversary of the first official announcement of a COVID-19 case in Turkey. While “hundreds of thousands of caregivers who had to work without rest, in drudgery conditions, without adequate and suitable protective equipment” have been infected, he notes, “553 caregivers, including 504 in activity”, are COVID-19 deaths[FEMININE

President Erdoğan’s growing attacks on doctors have angered healthcare workers. Speaking on March 8 on the growing emigration of doctors overseas, he said: “Let them go, if they go. Then we will employ our newly graduated doctors. According to the Hekimsen union, “about 9,000 doctors have resigned from the civil service in the past 20 months, almost 2,000 of them have gone abroad or are about to leave”.

While tens of thousands of doctors and their supporters protested Erdoğan’s statement on social media, growing social opposition expressed itself in the broad strike turnout and popular support for it.

A chemotherapy patient told the daily Evrensel: “The doctors are right. Who will take care of us without them? We have to make a big deal out of the doctors at all times”, before adding that “every hospital is full. You can’t get a doctor’s appointment. The government says, “Hospitals are better now,” which is not true. They say you should come a month later to get an appointment. When can I get an appointment? When I died?

The determination of healthcare workers and the public support they received led Erdoğan to take a step back. Speaking on Monday, he said: “This country owes a debt of gratitude to its doctors and needs them,” saying his government will pass legal regulations to meet some demands from healthcare workers.

Erdoğan’s very partial pushback reflects his government’s worsening position amid a deepening economic, social and political crisis. The criminal policies that have infected millions and killed hundreds of thousands during the pandemic have gone hand in hand with an unprecedented transfer of wealth from the working class to the capitalist ruling elites.

During the same period, the collapse of the Turkish lira was followed by a spike in the prices of basic necessities. Official annual inflation hit 54% in February, while the actual inflation rate was 123%, according to the independent inflation research group (ENAGroup). Prices, which have risen worldwide as a result of the pandemic, soared further during the war in Ukraine.

Under these conditions, popular support for Erdoğan has fallen to the lowest rate in 20 years, according to polls. Compounding this crisis and worrying the entire political establishment, there is also a growing wave of strikes in 2022.

From metallurgy to healthcare, from textiles to freight, from mining to warehouses and shipbreaking yards, thousands of workers have gone on strike against the rising cost of living and the devastating consequences of pandemic policies. According to data compiled by the Labor Studies Group, at least 106 wildcat strikes took place in the first two months of 2022 alone. The average annual number of wildcat strikes over the previous five years was just 97.

The strike movement in Turkey is only part of an emerging international movement within the working class. The only force that can end poverty and social inequality, murderous pandemic policies and the growing danger of a nuclear world war is the international working class, mobilized on the basis of a socialist program.

Sign up for the WSWS newsletter for healthcare workers!

Brian ChitembaTHE cost of living in Zimbabwe is skyrocketing. It brings back memories of the…

And they say the pandemic has made the situation worse. A national survey of nurses…

MANILA, Philippines — More than 126,000 private sector frontline medical workers have yet to receive…