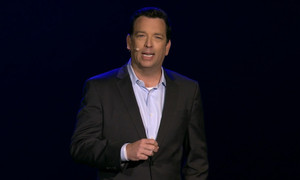 LAS VEGAS, Nevada – “The future of medical care extends beyond the hospital. “

Robert Ford, president and CEO of Abbott, said so in his keynote address at the 2022 Consumer Electronics Show (CES) in Las Vegas, Nevada on Thursday (WST).

Ford, the first healthcare industry leader to speak at the world’s most influential tech event, has revealed the company is developing a new consumer bio-wearable product called “Lingo.” According to Abbott, Lingo is a portable device that measures various biomarkers, such as glucose, ketones, and lactate, to help people manage their health, but is not a medical device.

Abbott CEO prepared his keynote address with nine experts and celebrities to highlight the changes in the medical environment facilitated by the Covid-19 pandemic and the development of digital health technologies while explaining his company’s role In this one.

“Covid-19 has further highlighted the importance of health and the value of technology,” said CEO Ford. “We will be able to manage health in advance and detect diseases at an early stage in the future. “

Emphasizing that technology gives people the power to digitize, decentralize and democratize healthcare and put more control over their health, Ford said, “We are creating a future that will bring you and your loved ones , more personal and more precise care. It’s happening right now. And its potential is no less than incredible.

Ford added, “The health care system can be threatening at times. And the worsening rate of health inequalities is astonishing. We try to solve these problems, for example by popularizing the FreeStyleLibre, the cheapest and most widely used blood glucose monitor in the world. Consumers can easily use it.

“Next-generation technologies are less invasive, more mobile and more closely interconnected,” said Ford. “The future of medical care extends beyond hospitals. He cited the example of the Neurosphere Virtual Clinic (NVC), a remote neuromodulatory treatment technology first developed by Abbott in the United States. NVC treats people with motor disorders from a distance, including Parkinson’s disease and hereditary tremors. It made its market debut in March of last year after obtaining approval from the United States Food and Drug Administration.

“One method of reducing uncertainty in medical care is testing. Up to 70% of medical decisions are also the result of testing, ”said CEO Ford. “We should decentralize testing and perform the right tests at the right times. Rapid testing can provide peace of mind and an execution plan.

Noting that simple tests will be distributed to homes and that families can advise doctors based on their results, Ford cited the example of the BinaxNOW COVID-19 self-test kits, which the company gave away for free at CES 2022.

“We can have the power to collect data using health technologies and capture and manage health in real time using it,” said Professor Leslie Saxon of the University of Southern California. . “Healthcare providers can also devote their time to patients. Life care, not health care, should be the norm. “

He went on to say, “It should take the on-demand form anytime and anywhere, not limited to clinics. On-demand form refers to the system or strategy in which demand, not supply, determines everything.