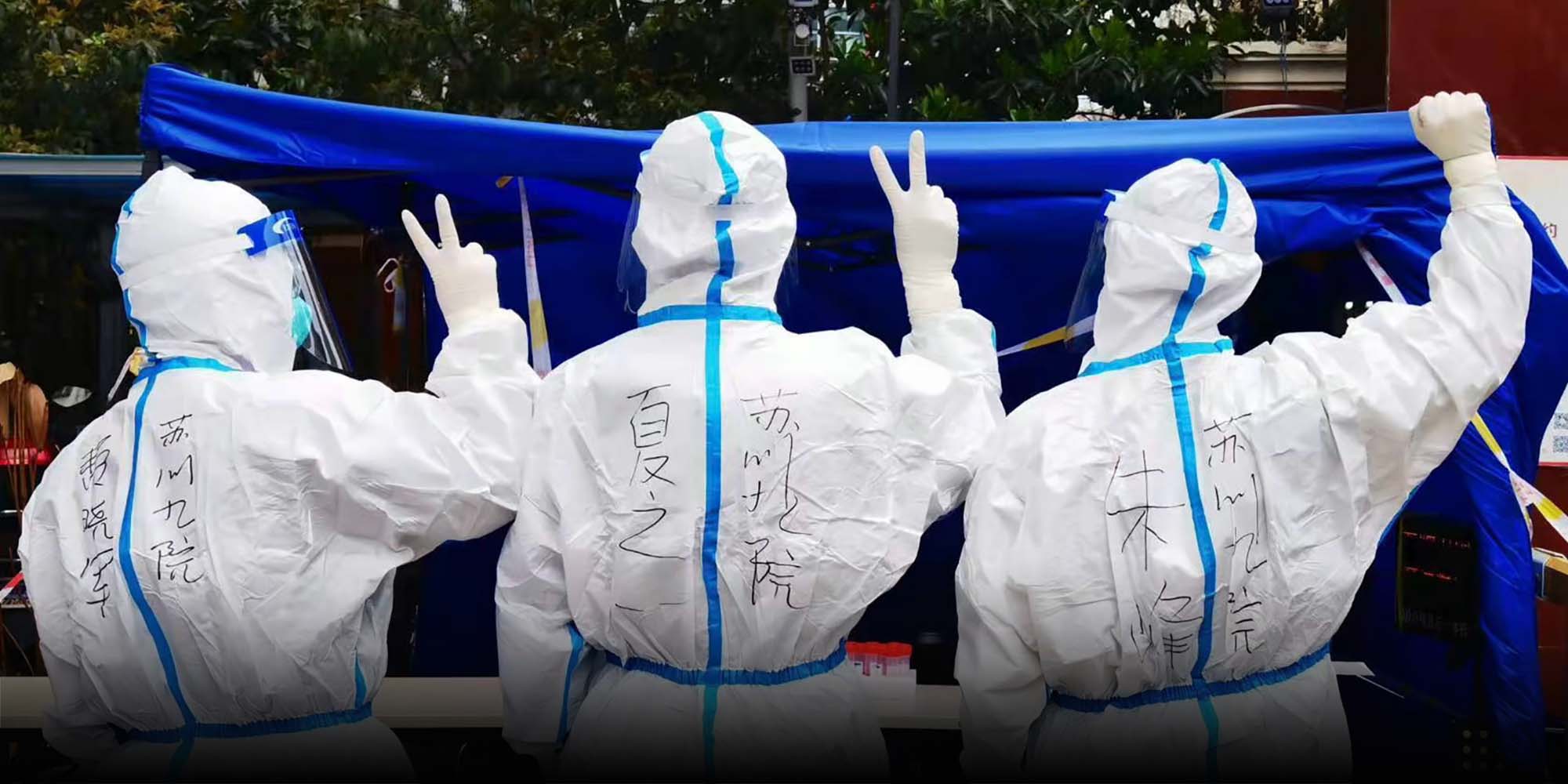 SHANGHAI — Medical teams from two neighboring provinces arrived in Shanghai this week to offer assistance, as the city’s health system comes under immense pressure amid rising numbers of COVID-19 infections.

About 3,500 health workers from Zhejiang and Jiangsu provinces will mainly help carry out mass nucleic acid tests on residents under lockdown, according to local authorities. On Sunday evening, Shanghai announced a two-phase lockdown from March 28 to April 5, dividing the city into two halves to test its nearly 25 million residents.

As of Wednesday, areas east of the Huangpu River and currently in lockdown had completed testing of all residents. About 20 million nucleic acid tests were performed in these areas during the two rounds of testing.

Wang Weijun, coordinator of Zhejiang’s medical team, told Sixth Tone that about 3,000 health workers arrived in Shanghai between Monday and Wednesday. All have been tasked with supporting work in the Pudong New Area, which is home to the city’s financial hub.

“The teams were assembled at short notice and worked long hours every day,” Wang said, adding that the 3,000 members were divided into two teams. “It will be sustainable to have two teams in rotation.”

Shanghai is currently experiencing its worst COVID-19 outbreak since the pandemic began in early 2020. With the city reporting thousands of cases every day – more than 5,600 infections were reported on Wednesday – authorities have erected “shelter hospitals » temporary – or fangcang — and converted exhibition centers into quarantine facilities for people diagnosed with COVID-19.

A nurse at Sir Run Run Shaw Hospital in Hangzhou said she was informed of the Shanghai assignment at 1 a.m. on Monday and was already in Pudong just after 8 a.m. the same day. The bus journey between the two cities usually takes about two hours.

“The system here is different from Zhejiang,” she said without giving further details, as she helped elderly residents register for the test on their smartphones. “The major challenge is to ensure that older people get the right QR codes.”

Since China began implementing digital health codes and online registrations for nucleic acid testing, many elderly residents have complained of struggling to keep up with the technology.

Wang said the medical team returned to Zhejiang after completing their day’s tasks, as Shanghai struggled to free up places for patients. He said health workers were transported to hotels about 150 kilometers away in Huzhou city.

“A team of 500 medical workers from Jiangsu is also helping to carry out nucleic acid testing, and a team of 1,000 members is expected to arrive from Anhui province,” he said.

As basic health workers spend long hours testing residents, those working in hospitals said they face immense pressure to ensure their services are not disrupted. The Shanghai health authority has asked all local hospitals to maintain their emergency and outpatient departments.

“We are being tested every day,” a doctor at a top hospital in Pudong told Sixth Tone, declining to be named as she was not authorized to speak to the media. “There have been positive samples found in the hospital environment from time to time.”

The doctor said his hospital requires a negative nucleic test report for the past 48 hours from patients and their families visiting the emergency room. Hospitals in other cities that experience outbreaks typically have similar rules, which has led to delays in treatment and even deaths.

“But it’s not a must for outpatients – the hospital is following the health authority’s directive to serve those with medical needs,” she said. “It puts us at risk, but my colleagues are at greater risk caring for thousands of positive patients in shelter hospitals.”

She said many hospital workers, including herself, stayed at work instead of returning home in the event of an emergency. After a long shift, she said they took out a folding bed to sleep in their office.

“The bottom line is that we have to keep working,” the doctor said.

(Header image: Medical workers from Jiangsu province pose for a photo in Shanghai, March 2022. From @记录QQ on Weibo)