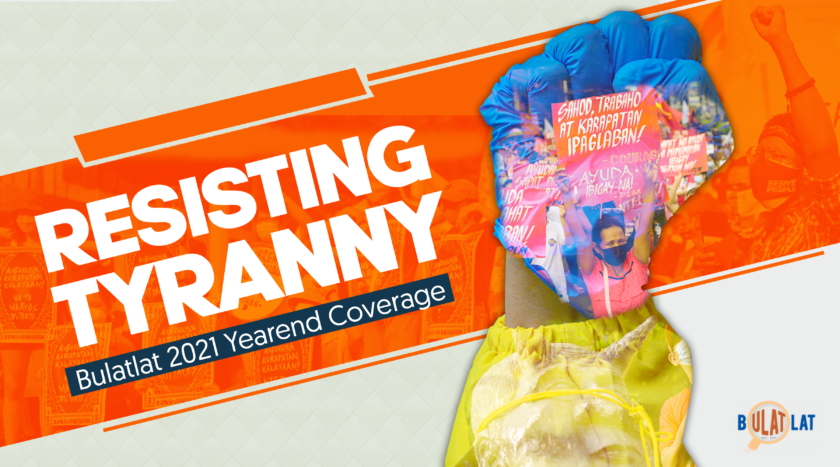 This is the sentiment of nurse Ulysses Arcilla, 49, of how they are being treated by the Duterte administration as the country grapples with the pandemic.

Arcilla said that for two years, health workers who are on the front lines of the COVID-19 response have not been treated fairly. Their benefits, if not denied, are incomplete and meager even though they are overworked. Due to their difficult conditions, some of their colleagues are forced to leave the profession, leaving those who remain overwhelmed with work.

The health workers did not sit down and made their voices heard. They took their call for the massive hiring of health workers with permanent positions and the release of meals, accommodation and transport (MAT), among others in the street.

The campaign to assert their rights and well-being has earned them some of their well-deserved benefits and has led to the expansion and consolidation of their unions and organizations.

Voicing their legitimate appeals has also made them vulnerable to red marking.

The National Task Force to End Local Communist Armed Conflicts (NTF-ELCAC) called health organizations, especially the Alliance of Health Workers (AHW), enemies of the state and organizations. facade of the Communist Party of the Philippines (CPP).

Jao Clumia, president of the St. Luke Medical Center Employees’ Association, has not been spared the harassment by state officials.

Clumia and some members of their union joined a series of protests outside the Department of Health (DOH) calling for the release of benefits for private and public health workers. He was also frequently interviewed by the media regarding the plight of private health workers as well as the non-payment of their benefits, allegedly provided by the government, such as MAT and special risk allowance.

It was in July 2021 when he was threatened by a man he believed to be a state agent. “This man said they admired our courage, that he was once an activist, but his colleagues left him behind. In our conversation, he was telling me to stop talking. He threatened me. I know their only goal is to silence me, ”he said.

But for Clumia, harassment is nothing new. “I’ve been receiving death threats since 2015. I won’t back down no matter what they do. But of course I also take precautions, ”he said in an interview with Bulatlat.

Clumia also said there were also other health workers in private hospitals, especially those who are often interviewed in the media, who reported cases of follow-up by unidentified men.

“Kung sino yung nagsasalita yun yung pinupuntirya nila,” he said. (They target those who speak out.)

Health workers are not immune to violence either.

Under President Duterte, there would be seven medical deaths. The most recent is the murder of a 62-year-old man Dr Raul Winston Andutan on December 2, 2021 in Cagayan De Oro City.

He was a urologist and medical director of the Maria Reyna-Xavier University Hospital when he was killed.

Dr Delen Dela Paz of Health Action for Human Rights told a webinar on December 8 last year that Andutan was serving not only in his hometown of Cagayan De Oro, but also in neighboring communities.

The doctors killed were mostly from the regions and served poor communities. On the one hand, Dr Dreyfus Perlas, 31, who was killed on March 1, 2017, was a volunteer in the Doctors in Barrios program of the Ministry of Health.

Dr Sajid “Jaja” Sinolinding, killed in April 2017, was an ophthalmologist from the town of Cotabato. He was reportedly known for his volunteer work in treating cataract patients free of charge. He also initiated medical missions in Basilan, Sulu and Tawi-Tawi.

Dr Mary Rose Sancelan and her husband Edwin were killed on December 15, 2020 in Guihulngan City, Negros Oriental. Sancelan was the city’s health officer and the leader of the city’s interagency working group for the management of emerging infectious diseases.

Prior to the couple’s murder, Sancelan was tagged as a spokesperson for the New People’s Army in central Negros. She was also included in a hitlist by an anti-Communist vigilante group.

To read: Doctor marked with red, her husband killed in Negros Oriental

The killings of health workers in rural areas also have a huge impact on community health work, Dela Paz said. She said that in 2020, Community Health Programs (CBHP) reported that one of the mountain clinics in Guihulngan town, Negros Oriental, had been forcibly opened by soldiers. Said clinic provides free health services such as consultations and first aid in the farming communities of Guihulngan.

In Cagayan De Oro, soldiers went to the home of a member of the community health program and asked where she was.

“These incidents sow fear among community health workers as well as residents,” she said.

Dela Paz said that these attacks on health workers also affect the delivery of services to the population.

“At the end of the day, people, especially the poor, suffer the most setbacks. When the government threatens, harasses and stalks health workers, service delivery is hampered, ”she said.

“The very few health workers and professionals working in the countryside can either choose to stay at the risk of their lives, or choose to work in cities or abroad,” she added.

Despite these attacks, health workers continue to voice their grievances to the government.

AHW President Robert Mendoza said there are healthcare workers who are not union members or non-union hospitals who contact their organization.

“We are vilified but on the ground, the health workers knew it was all lies,” Mendoza said Bulatlat.

They also filed a complaint with the Human Rights Commission after NTF-ELCAC spokeswoman Lorraine Badoy tagged AHW in red in a series of social media posts.

In May of last year, Health Secretary Francisco Duque III defended health workers. Duque said in his statement: “It’s not enough to thank our healthcare workers for their bravery during this pandemic, we must protect them as well. The DOH calls on the public and other government agencies to stand up for our healthcare workers and protect them from all forms of discrimination, intimidation and violence.

Mendoza said the red marking was discontinued after Duque released the statement.

The recent victory is the San Lazaro Hospital Employees Association (SLHEA), which for the past 10 years has been affiliated with Unyon ng mga Kawani ng Kagawaran ng Kalusugan Sentral (UKKKS) – a pro union -direction under the Ministry of Health. SLHEA-AHW won the election last year.

But over the past 10 years Arcilla, also president of SLHEA, has said that AHW members work more as a union than the UKKKS.

“Employees always contact us when they have management issues and we help them when needed. We are also consistent with our campaign for the well-being of healthcare workers, unlike the previous union which never attended a protest, ”Arcilla said in an interview with Bulatlat.

Arcilla also said that when the pandemic hit, they fought for the 12-hour shift for nurses instead of a longer work hour, a shuttle bus for health workers who live far from the hospital, housing for those who have chosen not to return home after the shift and food for those working in the COVID department.

All of this has been taken into account by management, he said.

Regarding the red marking of the AHW, Arcilla said he was no longer affected by it, as it had happened before Duterte.

“Health workers know there is no truth in this. In the field, they know what we do, who we are and that our efforts are all for the well-being of health workers as well as the population, ”he said.

Meanwhile, Clumia said they continue to organize their fellow private hospital workers and were able to form the Association of Private Health Workers of the Philippines (PHWAP) last year. There are currently 11 PHWAPs in the National Capital Region and one in Calamba, Laguna.

“We have to organize our ranks because the truth is that there are a lot of employees in private hospitals who don’t know their rights,” Clumia said.

Clumia and Arcilla encourage their fellow healthcare professionals to continue defending their rights and not be intimidated by the government’s efforts to silence its critics.

“We must not stop even if the enemies try to silence us. We fight not only for ourselves, but also for others. If we don’t talk, we just let them win, ”Arcilla said.

Clumia also reiterated, “We are the backbone of the company. If people get sick, who will look after them if we are all sick and tired and cannot work? Let’s make our voices louder so that we are heard. ”