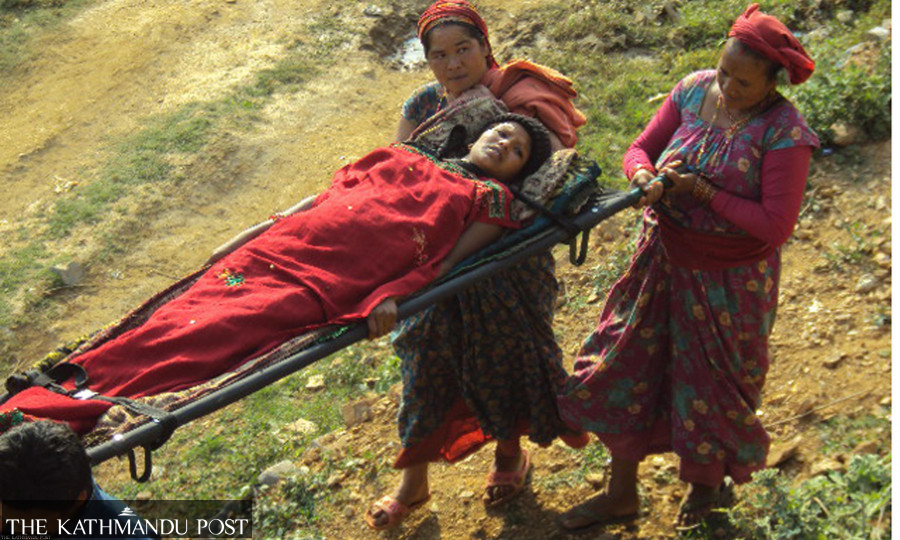 Nandalal Oli, 50, has been suffering from a fever for a few days. After he fell ill, his family rushed him to Daredhunga Basic Health Center in Setikhola, an hour and a half downhill from their residence in Kochhatte, Kalimati Rural Municipality-2. But Oli’s treatment was not possible there. His family then took him to the health post of Putalibazar, the center of the rural commune, a two and a half hour walk from Daredhunga.

Oli returned home after normal treatment at the health post, but his recovery was slow.

Anyone who falls ill in Kochhatte is forced to travel for more than four hours just to get general health care. Kochhatte, a village of 100 households, is not yet connected to a road network due to the difficulty posed by its rugged topography.

Most of these health centers suffer from shortages of health workers and medicines, depriving residents of proper health services.

Gangaram Oli, another resident of Kochhatte, said that even though the municipality has set up a basic health center in relatively closer Daredhunga, it lacks trained health workers and necessary medicines, among other essentials.

“People are forced to walk uphill, downhill and through the jungle to get medical attention,” Gangaram said. “The long arduous journey proved fatal for the sick people.”

He added that given the phenomenon of overseas employment, finding people capable of transporting a patient to a health center is difficult. “Pregnant women face major problems more than anyone because there are no health centers offering maternity services nearby,” he said. “They are even deprived of regular check-ups and iron tablets. Many pregnant women give birth on the way to the health center, putting their lives and those of their newborn babies at risk.

According to Thaman Bahadur Gharti, another resident of Kochhatte, two elderly people in the camp have lost their lives in the past two years due to the lack of timely medical intervention.

“The construction of the 15-bed base hospital in each municipality is underway to provide healthcare services to residents by specialist doctors, but the project is proceeding at a snail’s pace,” Gharti said.

Ved Bahadur Dangi, a 60-year-old man, stopped seeing a doctor more than two years ago because of the long distance between his village and a health center. No matter how bad his condition is, he doesn’t want to go to the health center for treatment or medicine.

“You have to walk more than three hours for a tablet of paracetamol and a sachet of rehydration solution. Instead, I bear the pain and stay home,” Dangi said. “I use herbs to treat my ailments. I have repeatedly asked the authorities to pay attention to the health services of the municipality. More than a dozen families have already migrated from this place to another because of the inconveniences in particular of drinking water, health and electricity. Others are preparing to follow suit.

According to Indra Bahadur Oli, Chairman of Kalimati-2 Rural Municipality, the municipality has not been able to set up basic health unit centers in all places. “We have asked the relevant authorities to organize health camps in the village and deliver medicine to the elderly and children at their doorsteps,” he said. “But none of these requests have been met so far.”