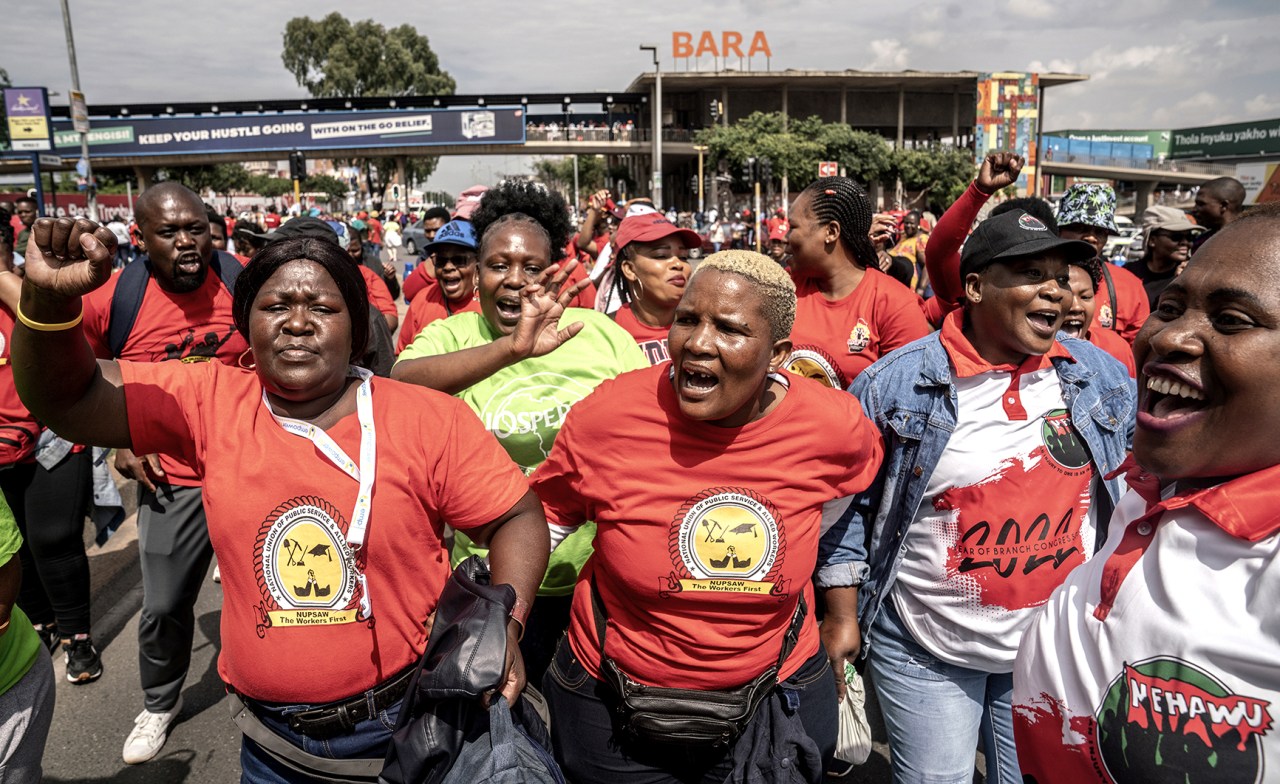 The standoff between civil servants and the government reached its climax, with workers taking to the streets to demand a 10% wage increase.

This follows Labor Minister Thulas Nxesi saying he was unilaterally implementing a 3% pay rise which would remain in place until 2026 when negotiations would then take place.

Nxesi announced the 3% wage increase as discussions continued at the Civil Service Bargaining Coordinating Council. youUnion leaders fear that a precedent of disregard for negotiations and unilateral decision-making will be set.

Tires were burning on either side of Chris Hani Road in Soweto, Johannesburg on Tuesday morning. Workers dressed mostly in union red colors were gathered outside, chanting and singing songs of struggle. Some ensured that no vehicles, including ambulances, entered the premises. Inside, patients lined up, unattended.

Of all the hospitals disrupted by the strike, Chris Hani Baragwanath University Hospital was the busiest. Union leaders say this is due to employees’ anger and frustration at earning about the same for years as the cost of living soars. Employees also cited issues such as understaffing, dire working conditions due to lack of functional equipment, medicine and even food.

The regional vice-president of the National Union of Civil and Allied Workers, Mziyanda Ndevu, said: “The picket started two weeks ago when all the staff, the nurses, the porters, your administrative clerk, all the employees gathered, because they feel they are insulted by this government with the 3%.

“What irritates the employees the most is this time when the employer went back in 2020 on a resolution taken in 2019… it brought out the workers in large numbers. We will shut down Pretoria if the government does not meet our demand for a 10% pay rise.

“We are going to shut down the whole country.”

“This government is betraying the loyalty workers have shown even during the Covid crises…instead of showing appreciation, they are being shown a huge middle finger. Even the ministers have received their 3% salary arrears, and they are earning millions…

“These workers don’t even have a house… look at the price of bread and oil — most of the workers are in debt. Our children are rejected for NSFAS because we are supposed to earn well, but most people cannot afford to send their children to higher education,” Ndevu said.

In December 2020, the Labor Appeals Court ruled that the government did not have to pay anti-inflationary wage increases to around 1.3 million civil servants because it could no longer afford to do so.

In 2018, the government and the unions signed a salary increase agreement that was to last three years. The government stuck to the deal for two years, but reneged on the third year because it wanted to cut state spending and debt.

Salary spending has been a contentious issue as it accounts for around 34% of national spending, but workers believe they have been patient enough and should be compensated with an increase above inflation.

Meanwhile, civil servants are over-indebted; a 2007 study found that, according to data provided by Persal, the total debt owed to microlenders by civil servants was R13.3 million in the financial year 2006/2007. Of this amount, R3.3 million (25%) is allocated to employees of national departments. The balance (75%) is attributed to the microcredit debt of civil servants based in the provincial departments.

University Hospital nurse Chris Hani Baragwanath and regional chairwoman of the Democratic Nursing Organization of South Africa, Yandisa Zungula, said the government’s unilateral decision-making smacks of arrogance, which began in 2019/2020 when the government reneged on the salary resolution that had already been agreed on.

“Will we ever be able to negotiate and communicate if we know they can just go ahead and do whatever they want…the bargaining structure has been undone,” Zungula said.

“We work in terrible conditions…a broken window takes two years to fix, and there is a shortage of medicine, equipment, even something as basic as linen…At one point, there is no there was even more bread for the patients to eat.

“We are the largest hospital in the southern hemisphere, but no effort is made to ensure a quality patient experience…we are understaffed…a nurse will be a porter and a cleaner – it’s a 24 hour service. 24 but there isn’t even an overnight cleaner,” Zungula said.

Meanwhile, the Gauteng Department of Health won an interim ban on strikers in the Johannesburg Labor Court on Tuesday afternoon.

In a press release, Motalatale Modiba, head of communications for the department, said the ban is “against several unions to prevent their members from obstructing the delivery of healthcare services to patients.”…

“It also prohibits protesters from destroying or damaging property or preventing the free movement or access to health facilities of any of the [the department’s] desks.”

The interdict also directs police “to assist the department when necessary to enforce the interim order, which will remain in effect until the court date…of March 1, 2023,” said Modiba. CM/DM