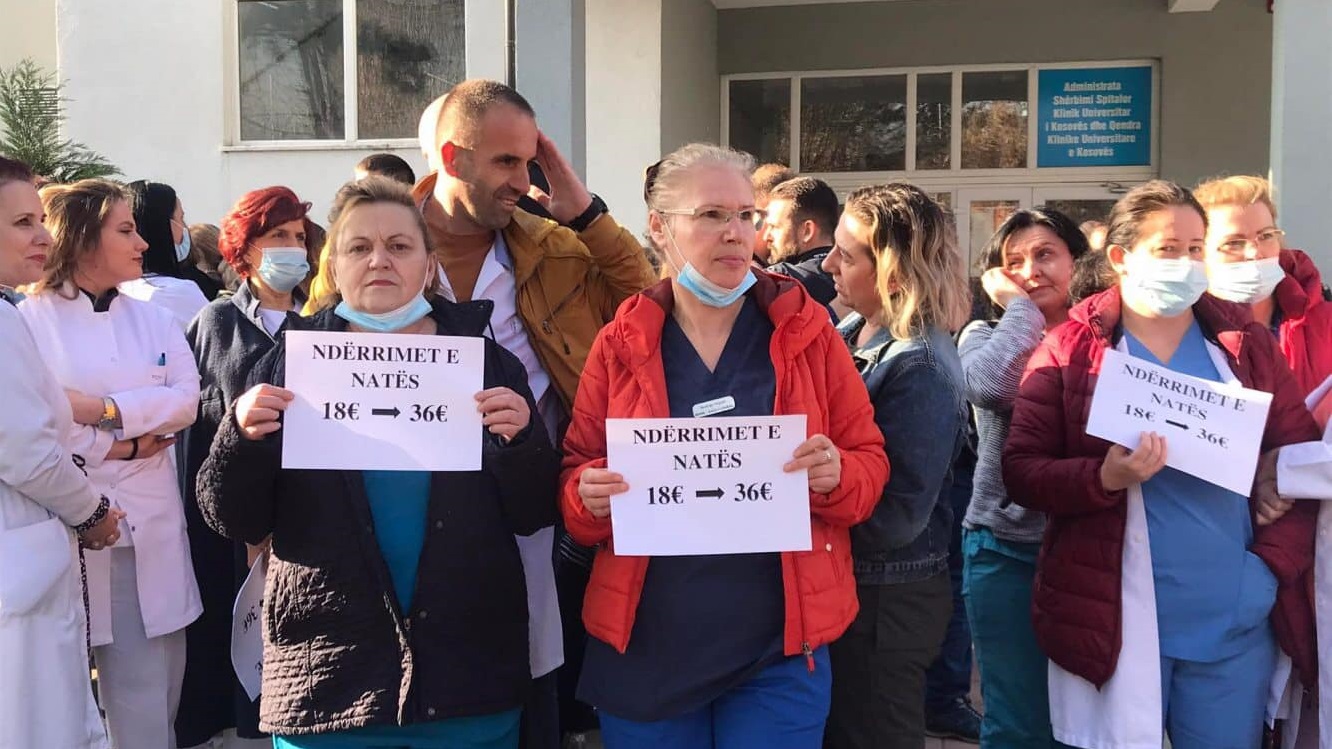 The rising cost of living is adding to the frustration of health workers in Kosovo, who have campaigned for higher salaries and better staffing at public health facilities throughout the pandemic. After a one-hour strike on 5 April organized by the nurses’ union Sindikata e Infermierëve të Kosovës (SIK), where nurses demanded, among other things, the doubling of night work rates from €18 to €36 and an increase in salary coefficients, health worker organizations continue to warn that government inaction could lead to new problems in the health system.

The strike took place in several public health institutions, including the University Clinical Center of Kosovo in Priština and hospitals in Peja, Mitrovica and other towns.

Currently, nurses and doctors in Kosovo are paid around €400 and €600 respectively. Doctors’ income is set to be significantly increased by a new reform planned by the government, but other groups of healthcare workers could only count on more modest increases, which would not be enough to substantially improve their standard of living. .

Low salaries and poor working conditions in the public health sector are fueling the wave of emigration of health workers to other countries, especially to the European Union. According to the SIK, 384 nurses left the country in 2021, and the union expects another 1,000 to do the same in 2022. The rise in numbers is concerning because even without losing more health workers, the Kosovo’s health system needs to employ 5,000 more nurses to achieve adequate staff-to-patient ratios, the union warned.

Fitim Havolli, an SIK representative, warned in March that nurse-patient ratios in Kosovo were problematic long before the pandemic, and little or no improvement can be seen since. “While the WHO reports that countries with stable healthcare systems have a nurse to patient ratio of around 1:7, the situation in Kosovo is completely different. Personally, I worked alone in a hospital ward with 11 two-bed rooms, which means caring for 22 patients, throughout the pandemic,” Havolli told Al Jazeera Balkan.

Although doctors are better paid, their working conditions are not significantly better. Many of them also choose to leave Kosovo instead of keeping their jobs in public hospitals. Kosovo’s Medical Chamber has warned that 450 doctors have left the country since 2018. “We are witnessing the departure of a new generation of healthcare workers, including young doctors and young nurses and midwives,” said Besim Kodra of the Patients’ Rights Alliance.

The emigration of health workers has also led to an increase in their average age, which for nurses is now 50 years old. Although patients and health workers note that there is cause for serious concern, the government is not dealing with the subject adequately. Among other things, they are not taking steps to at least retain nurses who have been employed on temporary contracts to boost the pandemic response. In one of its final communications to its members and the public, SIK raised the issue of the status of temporary staff when their contracts expired and demanded that they be kept on permanent contracts instead.

“Social and economic well-being, the development of adequate working conditions for nurses, midwives and other health professionals would result in an improved quality of care delivery for the benefit of all of the company,” SIK said in a press release explaining its plans for workers. Shares.

Read more articles from the latest edition of the People’s Health Dispatch and subscribe to the newsletter here.