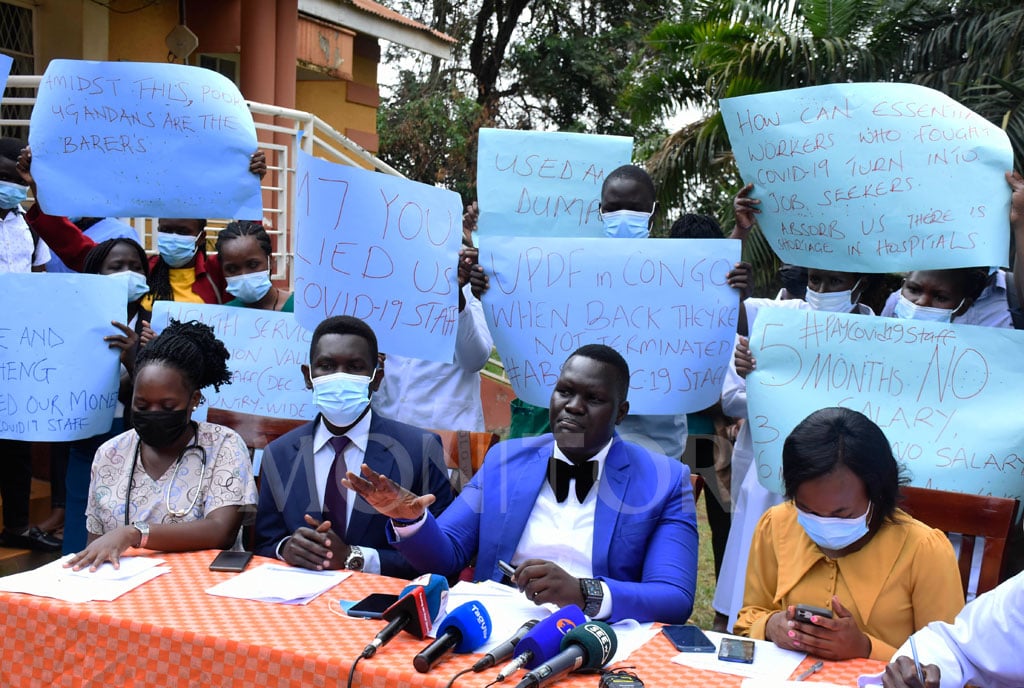 A disagreement has erupted between the Ministry of Health and the Uganda Medical Association (UMA) following the former’s decision to terminate the contract of health workers who ran Covid-19 treatment units in public facilities.

The March 18 dismissal letter signed by Permanent Secretary Dr Diana Atwine comes as the department has failed to pay health workers for more than four months.

In the letter, which was sent to all hospital managers, Dr Atwine said they had taken the decision to terminate workers’ contracts due to the reduction in Covid-19 infections which led to little of patients in hospitals to be managed by health workers, coupled with budgetary constraints.

Accordingly, the Ministry has instructed hospital managers to integrate the management of Covid-19 into the existing structure to ensure the continuity of Covid-19 service delivery in hospitals and ensure the proper handover of any government property that may be in the possession of the personnel concerned.

Dr Daniel Kyabayinze, director of public health at the ministry, said they currently only have two patients admitted to hospital.

This is a significant reduction from last year’s second wave when Covid-19 patients overwhelmed hospitals and some died off wards as units were full.

More than 1,000 health workers – 200 doctors, 600 nurses and other health professionals have been affected by the layoff, according to UMA President Dr Samuel Oledo.

But UMA General Secretary Dr Herbert Luswata and ministry spokesman Mr Emmanuel Ainebyoona put the number at 350. Mr Ainebyoona said some health workers were funded by partners in the development.

Staffing gap
Speaking to reporters in Kampala yesterday, Dr Oledo said the termination will create a serious service deficit in hospitals and affect the delivery of general services as hospitals across the country are already struggling with intolerably limited health workers .

“We have a 40% staffing deficit in hospitals. Even when working in the Covid-19 treatment unit, some were deployed to help in other departments of the hospital,” he said.

He added: “But now you are telling us that even the few people who are employed on a contract basis – doctors, pharmacists, anesthesiologists, nurses since the outbreak of the pandemic in 2019, trying to solve the problem of the disease and make sure we have a minimum number of deaths, are expelled while providing care!

Dr Oledo called on the ministry to reverse the decision and pay the arrears immediately, warning they would consider further industrial action.

One of the doctors concerned, Ms Maria Nantayi, a nurse, who has been caring for Covid-19 patients at Mulago Hospital treatment center for two years, said she felt the ministry had used them and abandoned.

“Nationally, as nurses, we have our own challenges. In the last five months, people have not received their salaries, the National Social Security Fund was last paid in November and some people have not obtained their contract from the Ministry of Health,” said she declared.

“We appeal to the PS to pay us our salaries. If it does not come out this week, another action will be taken,” Ms Nantayi said.

She added that the government validated them at the end of 2021 and promised to absorb contract workers, a claim the ministry did not deny.

Mr. Emmanuel Ainebyoona, the spokesperson for Health, told this newspaper that the government will pay the arrears of medical personnel in a few days and also select those who have the desired qualities to continue working in hospitals.

“We decided to terminate the contracts because we never had the resources to meet their payments and indemnities. Since there are no cases requiring admission, we said we have to let them go until there is a threat and there are resources,” Mr Ainebyoona said.

He did not mention the amount of money the government was spending on health workers.

Mr Ainebyoona added: “We are also analyzing various qualifications to see which ones can be absorbed into the available slots that have the salary.”