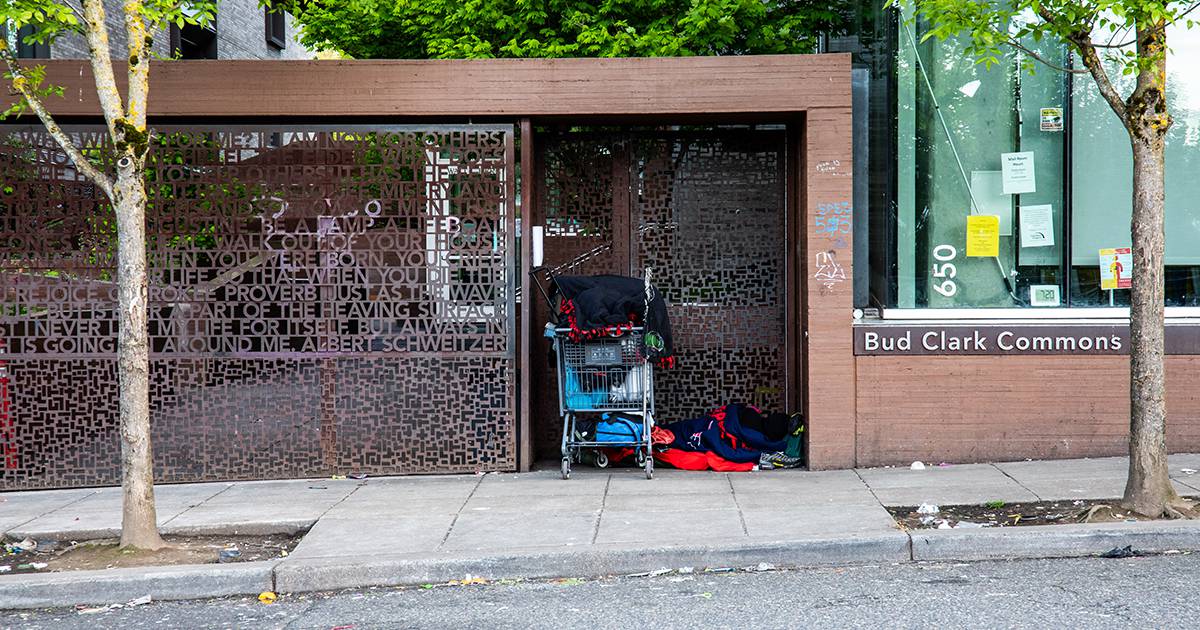 Multnomah County officials were so alarmed by security threats to health department employees in downtown Portland that they paid a security consultant $8,500 this spring to assess the risks at the headquarters of the Gladys McCoy’s health department in Old Town.

That report, given to the county by Foresight Security Consulting on March 15, was candid. “The density of unauthorized homeless camping immediately around the McCoy Building poses the most immediate, consistent and palpable threat to the safety of McCoy Building employees and contractors,” the report concludes.

The McCoy Building is a gleaming nine-story medical center across from Union Station. At full capacity, it contains more than 400 county health workers who work in a pharmacy and three medical clinics, as well as administrative employees and mental health and addiction treatment staff. (It’s currently running at about 25% capacity.)

The streets around the building are regularly lined with tents. The building sits at the epicenter of a struggling Portland: the area around Union Station, according to the report, is plagued by drug addiction, homelessness and mental illness. Unlike nearby high-rise apartment and office buildings, the McCoy Building is largely there to serve the people living in these tents.

But over the past year, a growing number of violent and threatening incidents at health care facilities across the county, including McCoy, have left health care workers afraid to come to work, according to internal county documents obtained by WW which summarized the employee safety forums held between January and March. A report on these forums indicates that employees, some of whom are outreach workers in the field, fear their workplace because of what is happening outside.

“I live alone; nobody would know if I didn’t come back,” an employee told county officials.

An employee remembers talking with his wife about whether he should start wearing a body armor at work. An employee said she was verbally harassed and had objects thrown at her. Another woman said she was assaulted twice on the same day, including being punched in the face.

Employees were chased down the street by armed people. A man once threatened to kill an employee, accusing him of sleeping with his wife. One official wrote: “Of my core team, 10 have been issued protective orders against others who have threatened them.”

These workers are not business owners who think that tents and garbage are cutting into their profits, or landlords who worry about declining property values. They are health care workers keenly aware of the overlapping systemic failures that put people, many of them county patients, both housed and unhoused, in situations that pose a threat to workers.

And in the documents, many workers say the threat puts them in an ethical dilemma: They don’t want to involve law enforcement, fearing the police will make things worse. But they also fear for their own lives.

“We don’t want our customers to be involved in the justice system, especially our BIPOC customers,” one worker wrote. “We are very close to our customers. At the same time, our clients who suffer from methamphetamine-related psychosis have vast outbursts of aggression – our walls have been broken down.

Reported fears at the McCoy Building and other county health clinics are not exceptional – over the past year, other county public spaces, such as libraries, have seen an increase in fear of employed for their safety – but these are perhaps the most powerful examples. dangers faced by public servants.

The county says it is taking steps to make McCoy a safer space.

McCoy “is one of many clinics, libraries and other services across the county that have seen changes in the acuity of nearby people who need behavioral health interventions, changes in neighborhood dynamics and an increase in community violence,” said Julie Sullivan-Springhetti, a county spokeswoman. “We are committed to developing and maintaining safer places for our staff and customers.”

Commissioner Sharon Meieran, also a candidate for the presidency, tells WW she agrees with the employees “that the county is not taking their concerns seriously enough”.

Employees feel the county has done little to make them safer.

“There have always been problems there since the building opened, and it has become more and more serious,” says Rachel O’Rourke, union representative for the American Federation of State, County and Employees Employees. of Municipalities, Local 88, which represents county employees. “Why is it taking so long for the county to realize this is terrible?”

The consultant’s March 15 report details a number of improvements the county could make. Some were simple, like increasing the presence of security guards around the building.

Others were ambitious, like buying the nearby Greyhound Terminal, turning it into a four-story parking lot, then suspending an air bridge connecting the two buildings. Or send patrols to nearby streets and bulletproof the exterior of the building.

Foresight Consulting also sprinkled a little tension between the county and the city: Use Mayor Ted Wheeler’s words to push the city to action.

The consultant quoted Wheeler as saying that in March the city would do everything possible to get people off the streets. The consultant wrote that the county should “take advantage of this” and “encourage the City of Portland to remove campers from areas adjacent to the [safe rest village] and Greyhound shelter.

The city is responsible for conducting homeless camp sweeps, which the county does not participate in. The sweeps are highly controversial because they create instability for vulnerable people who have nowhere to go.

The county tells WW he did not ask the city to sweep the camps. But he applied opaque film to part of the building’s windows, created a new way to report incidents, offered de-escalation training and asked the Portland Police Department to help curb drug trafficking around the building. . (Police Chief Chuck Lovell, according to the county, told Multnomah County Chairwoman Deborah Kafoury that “there were limits to the bureau’s ability to be proactive.” The county says it reviews the report for further action.

Prior to the report, the county had already taken some steps to improve safety. He offered clinic employees personal security alarms, offered escorts to and from transportation to the clinic, hired additional security guards, and gave employees parking vouchers for January through March, estimating that once that the days would get longer, the light of day would deter incidents.

The union representing construction workers, however, says the county took little meaningful action after the report.

Joslyn Baker, president of Local 88, said the parking passes were a “little concession that was really, really hard to get. And it came after an incident.

“What is the tipping point? What will it take to activate them? asks Baker.

Such frustration is not new in the building: two months ago, WW reported that the building’s HIV clinic was supposed to have a negative air pressure room to protect clients from the spread of COVID-19, but in fact the clinic did not have such a room. Despite this, it took the county more than a year to move forward with a plan to install negative pressure chambers.

The county insists it takes the security of the McCoy building seriously.

“After one of the most disruptive social and economic times in our history, the county is focused on improving patient and employee safety across our system,” Sullivan-Springhetti says. “We are committed to developing and maintaining safer places for our staff and customers.”

But the tenor of employee comments in the county report shared with WW was desperation and frustration: “When the email is sent, and at the very bottom, it lists therapy options. This makes me furious,” one person wrote. “Employees don’t need therapy, they need to feel heard.”

Last fall, Multnomah County tried to encourage COVID-19 vaccinations with $50 and $100 gift cards given out at pop-up locations manned by county employees.

A Sept. 3 email from county health department director Ebony Clarke to employees describes what happened next: At two locations, county employees were threatened by gunmen.

“Many of you have also had to deal with disputes over incentives and endure verbal abuse from members of the community/general public,” wrote Clarke, who assured workers the county was stepping up safety.

“The desperation was understandable,” says union representative Rachel O’Rourke. “It was basically putting a pile of cash with a group of county employees, and there was a level of desperation that I don’t think the county anticipated or understood.”

Following the incidents, the union asked the county to suspend its incentive program until stricter safety protocols are enacted. County President Deborah Kafoury said no, according to Percy Winters, then president of AFSCME Local 88, in an email to members Sept. 13: “The president said she would not put end of program for now.”

The president defends her approach.

“I wasn’t going to simply shut down a program that would obviously save lives,” Kafoury said. WW. “Instead, I have increased security, ensuring our security contractor is present at most events, moving teams to safer locations and closing any clinics in the event of an incident. “