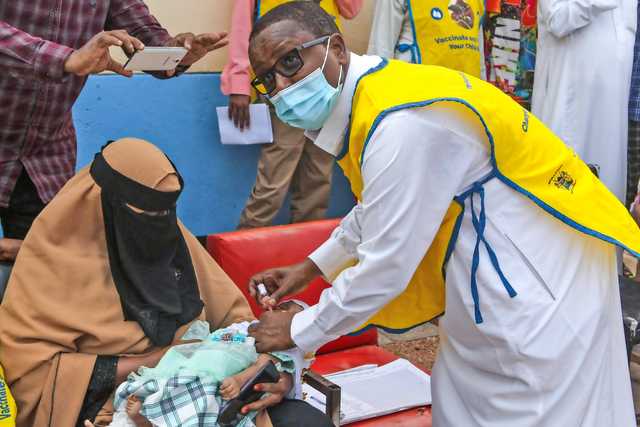 As bombs rain down on defenseless communities in Ukraine, we are once again reminded of the extreme vulnerability of women, children and adolescents in conflict zones – and the risks to which health workers, trying to respond their needs, face in times of conflict and crisis.

On World Immunization Week, we recognize that basic health rights – from midwifery services to routine immunization – are a crucial lifeline, especially in conflict-affected settings. . Yet too many women and children are deprived of these services.

The horrifying situation in Ukraine is the latest in a growing number of conflict-triggered humanitarian crises; in 2020, a record 56 active conflicts were documented and last year sub-Saharan Africa saw its highest number of coups in 20 years.

So, while Ukraine has captured the world’s attention, there are a number of other longstanding and growing conflicts that also deserve the attention and political mobilization of the global community.

Health and humanitarian workers providing care on the front lines face immense and growing challenges and risks. These circumstances also make it even more difficult for the most vulnerable women, children and adolescents to access the care they need.

Violence against aid workers claimed 484 individual victims in 2020, of whom 117 died, making 2020 the worst year on record for the second consecutive year. In Ukraine alone, 147 attacks against health personnel, facilities, supplies and transport have been verified as of April 19, 2022, resulting in 73 deaths and 52 injuries.

Where health workers are at risk, the lives of women, children and adolescents are also at risk. More than 10 million deaths of children under five between 1995 and 2015 worldwide can be directly and indirectly attributed to conflict.

Similarly, following the killing of eight polio workers in Afghanistan in February 2022, the national polio vaccination campaign was suspended in two provinces of Afghanistan, one of the few countries where polio is still endemic. despite global efforts to achieve eradication.

Conflicts have brought polio back to otherwise polio-free countries. For example, Syria and Iraq experienced polio outbreaks for the first time in decades after the emergence of civil war.

Syria provides another stark warning of the backlash that occurs when health workers are unable to deliver services. It had achieved 80% coverage of combined vaccination against diphtheria, whooping cough (whooping cough) and tetanus (DPT) in 2010.

However, after years of devastating armed conflict, the coverage rate fell to 47% in 2018. the 2014 Ukrainian conflict. A similar, if not worse, outcome is to be feared during the current conflict.

A marker of the inequalities that children and their families face as a result is the prevalence of ‘zero dose’ children in such settings. These did not even receive a single dose of the DTP vaccine.

Zero-dose children and their families live in communities excluded from social protections and may not have access to some or all essential services across the continuum of sexual, reproductive, maternal, newborn, child and adolescent health.

To protect those who protect us, there is an urgent need for targeted coordination of investments to promote safe access to services, including the delivery of vaccines and other essential services and commodities through private-public efforts at multilevel and multisectoral.

For example, when meaningfully engaged, local NGOs and civil society can dramatically improve the reach and operational flexibility of health interventions.

If health workers are to provide vaccines and other essential services in these settings, they need constant protection, as urged by the United Nations Security Council (resolution 2286) and mandated by laws international humanitarian and human rights law.

The international community should hold States and armed groups accountable for respecting international humanitarian law in the territories they control.

In addition, health workers should be recruited, trained and funded locally whenever possible. This will help foster trust between health workers and the communities they serve, given their unique understanding of local contexts. It is also essential to ensure a sustainable workforce, reduced security threats and better staff retention.

Global progress towards the health SDGs depends on recognizing these disparities and targeting settings that most need support to ensure continuity and access to services. Two years of the pandemic have already set us back a lot, so there’s no time to waste.

As the bombs continue to rain down in Ukraine and elsewhere, there is a greater need than ever to invest heavily in the safety and protection of health workers and to ensure the continuity of services and supplies under fire.

Kaljulaid is the UN Secretary General’s Global Advocate for Every Woman, Every Child and former President of Estonia.